An heat engine with Carnot cycle, also called Carnot heat engine, can be simplified by the following model: 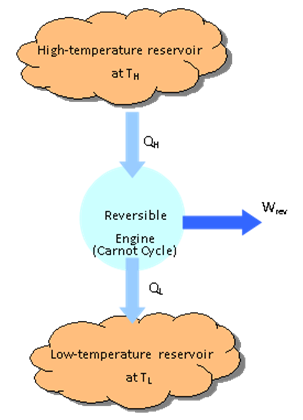 The Carnot cycle in this heat engine consists of two isentropic and two isothermal processes.

During this process, heat is absorbed. Gas expands reversibly at the constant temperature TH.

This process is isentropic. The engine is perfect insulated so that no heat is lost and absorbed. Gas continues expanding slowly until the temperature drops from TH to TL.

After gas reaches the low temperature TL, some external force is applied on the engine in order that gas can be compressed. Since the temperature remains constant at TL, no change of internal energy of gas occurs, if we assume that gas is ideal gas. Knowing from the 1st law of thermodynamics, we obtain a conclusion that heat must be transferred from engine to low-temperature reservoir.

This process is isentropic. The engine is perfect insulated so that no heat is lost and absorbed. Gas continues being compressed slowly until the temperature rises from TL to TH. The process comes to an end when reaching its initial state (state 1).

The thermal efficiency of the Carnot heat engine can be calculated with the general expression:

From the T-s-diagramm, we obtain:

This equation is also referred to as Carnot efficiency.

According to the Carnot efficiency, we can also draw the following conclusions:

As mentioned above, the Carnot cycle is a reversible process which delivers the most work output for a heat engine operating between the same temperature limits. Hence, if a heat engine has the thermal efficiency of ηth, then: